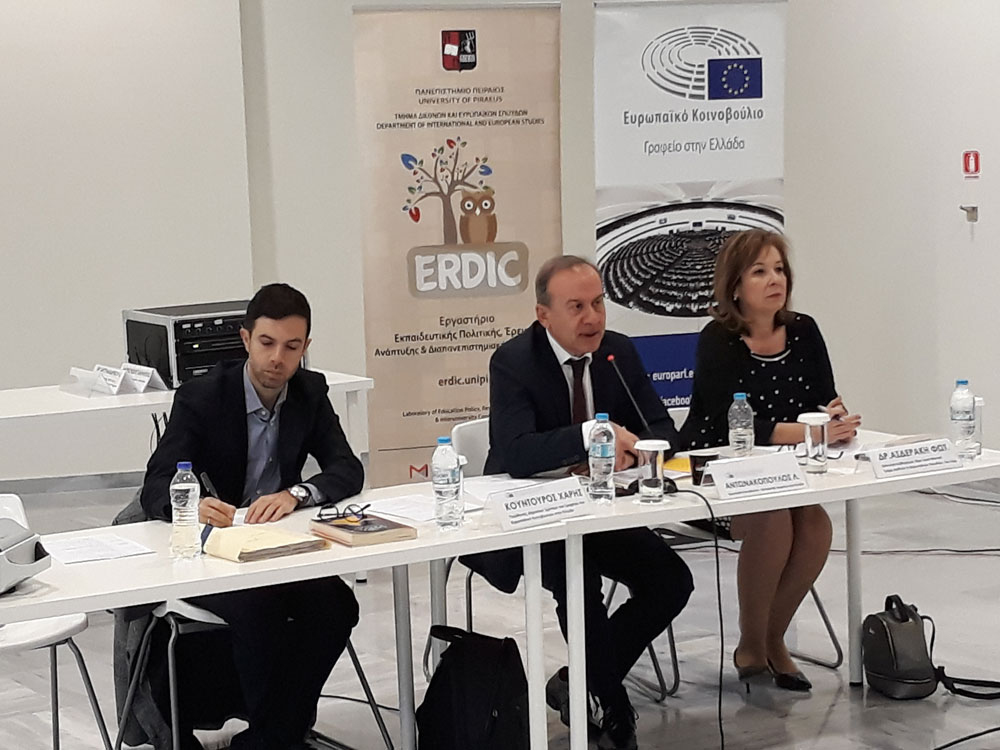 Τhe European Parliament Liaison Office (EPLO) in Greece, the Laboratory of Educational Policy, Research, Development and Inter-University Cooperation of the Department of International and European Studies of the University of Piraeus and the Department of Educational TV of the Ministry of Education, Research and Religious Affairs in cooperation with the European Information Center (EUROPE DIRECT) of the City of Athens, organised a training seminar for the teachers of the Ambassador and candidate Ambassadors at the Serafio Sports, Culture and Innovation Center in Athens, on 2/2/2018 within the European Parliament School Ambassador Programme. About 100 lyceum teachers from 33 schools of Athens, Peloponnesus and the islands of Greece participated in the seminar.

During the seminar, Mr. Dimitris Papadimoulis, Vice-President of the European Parliament, delivered his greetings through a video message and Mr. Miltiadis Kyrkos, member of the European parliament gave an introductory speech.

The main speakers of the seminar were, Mr. Leonidas Antonakopoulos, Head of the European Parliament Information Office in Greece, Dr. Foteini Asderaki, Assistant Professor of the Department of International & European Studies of the University of Piraeus and Jean Monnet Chair on “European Union’s Education, Training, Research and Innovation Policies”, Dr Charis Kountouros, Public Relations Manager at the EPLO in Greece, Dr. Sofia Papadimitriou, Head of the Educational TV of the Ministry of Education, Research and Religious Affairs, Ms. Eleftheria Markozani, PhD candidate at the Department of International and European Studies of the University of Piraeus, and Mrs. Evi Hatziandreou, scientific partner, DIKTIO network for reform in Greece and Europe.

Within the framework of the event, presentations and discussions were held on the following subjects. European Union: principles, operation, institutions. The European Parliament: structure, role, legislative responsibilities. The legislative process in the European Union. Open Teaching Practices and teaching scripts in the 21st Century School. Presentation of the IDEA programme. Youth participation in the democratic processes, as a response to populism. The EPAS program: structure, themes, educational tools and website.